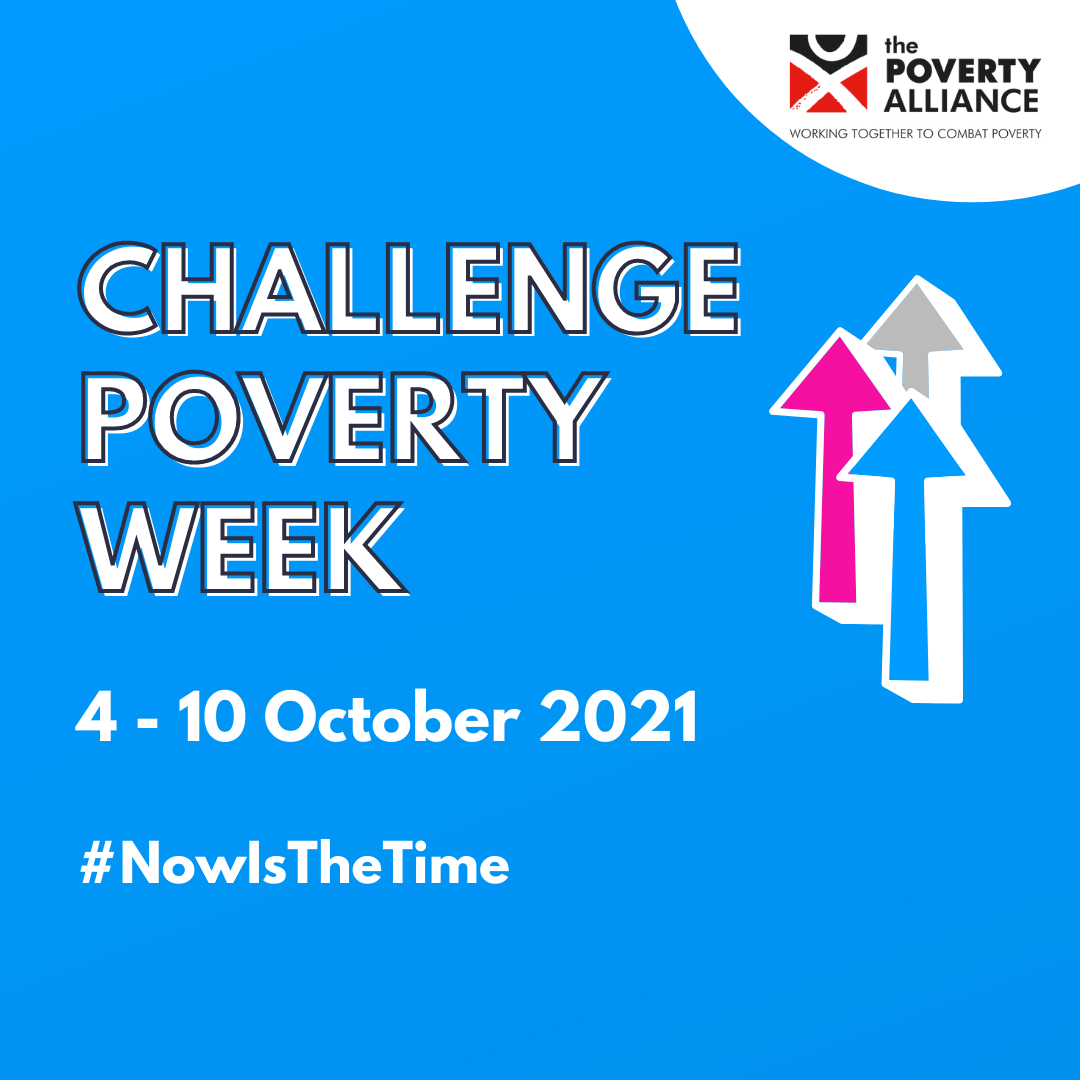 Challenge Poverty Week – coordinated by the Poverty Alliance and supported by organisations from every major sector in Scotland – takes place this week at a time of growing hardship across Scotland.

Starting on Monday 4th October and running until Sunday 10th October, hundreds of organisations from across Scotland will come together – through holding events, activities, and actions – to raise their voices for the solutions to the rising tide of poverty.

Even before the pandemic, one in four children were growing up in the trap of poverty. Now, with the looming £20 Universal Credit cut, the end of furlough, the lifting of the energy price cap, and rising food prices, many more face being swept into poverty and hardship. Those organisations participating in Challenge Poverty Week – which include children’s charities, third-sector organisations, trade unions, schools, local authorities, football clubs, environmental organisations and many more – are using the week to say that these levels of hardship are not in line with our shared values of compassion and justice as a society. Highlights from the week will include:

Online public events from our partners will include:

“Now is the time for all levels of government to take the action required to loosen the grip of poverty on people’s lives.

Challenge Poverty Week is an opportunity for organisations and individuals to raise their voices in support of the solutions to poverty, including the immediate doubling of the Scottish Child Payment and the extension of free bus travel to those on low-income benefits and all under 25s. Reversing the UK Government’s decision to cut Universal Credit will be a call that organisations across Scotland are supporting. It is a decision that highlights that tackling poverty is about political choices: we need to make better choices now if we are to prevent more people being swept into poverty.

Next month, at COP26, the world will be looking to Scotland for leadership in the fight against the climate crisis. We can show leadership in our efforts to end poverty too: that’s why we’re calling on the Scottish and the UK Governments to redesign our economy so we can all be part of a more just and greener Scotland.”

“Food bank use has rocketed by 63% over the last five years because people just can’t afford the basics. And over the last year, families have struggled more than most. We must use the powers and we have the cross-party consensus to take the action required to tackle poverty and getting involved in Challenge Poverty Week is an opportunity to help make that a reality.”

“Our mission is to create a world where diabetes does no harm, yet by far the biggest burden of diabetes falls on our least affluent communities – and the gap between the richest and poorest is widening. It’s therefore absolutely crucial that we tackle poverty. We’re taking part in Challenge Poverty Week because it’s chance to bring people together to explore how we create that change.”