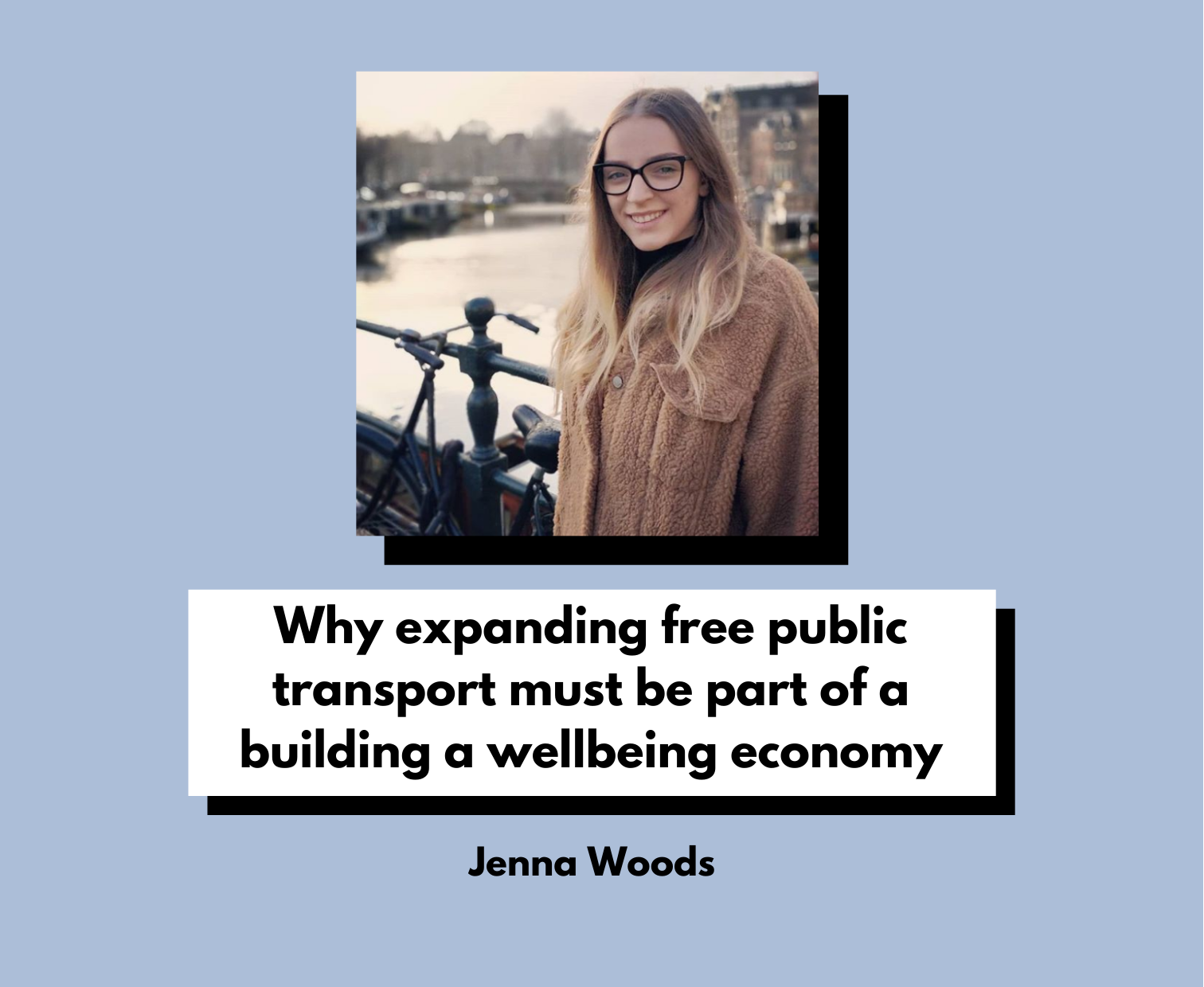 Activist Jenna Woods shares her experience of navigating unaffordable transport costs as she pursued higher education and the world of work. She argues that expanding free public transport to under 25s and people receiving Universal Credit would help alleviate poverty and level the playing field.

In a country as prosperous as Scotland, everyone should be able to access opportunities to flourish and live full lives. But even before Covid-19, the high cost of transport was trapping people in poverty. Too many people were unable to take jobs, or attend college or university simply because they couldn’t afford to get there. The Scottish Government has said it wants to build a wellbeing economy. Expanding the provision of free travel would be a great step towards this.

The latest Scottish Government figures produced before the pandemic showed one in five people were living in the grip of poverty. Unless our governments take urgent action, these figures look set to get worse. In the last six months, people already living on low incomes have seen their hours reduced, or cut entirely. Others had been plunged into poverty for the first time. Women, disabled people and Black and minority ethnic communities were and continue to be particularly at risk of living in poverty.

In Scotland, almost 500,000 people are now relying on Universal Credit, a benefit which should exist to keep people afloat, but instead, has been widely recognised as pulling people into poverty and debt.

This week is Challenge Poverty Week in Scotland. It’s a chance for all of us to get behind the steps we need to take to build a more equal society. Many of these steps will rightly focus on increasing people’s incomes, but reducing living costs is also a key part of tackling poverty.

Poverty Alliance, Scotland’s network of anti-poverty groups, has called on the Scottish Government to extend free travel to recipients of Universal Credit and those under the age of 25. As a 25 year-old with experience of living on Universal Credit I know what a difference such a policy could make.

Many people in receipt of Universal Credit will struggle to pay their energy bills, keep a roof over their heads and put food on the table. It’s outrageous that they should have the added worry of whether they can afford the cost of travel to attend a university lecture in the city centre or to get to that big job interview.

My whole life I have lived in Greenock, Inverclyde, the town whose centre was named Scotland’s most deprived area in January this year. Deprivation in my town comes most notably from a lack of educational opportunities and decent jobs. So many of us, myself included, take up education, training and employment outwith the region, travelling to Ayrshire, Paisley, Glasgow and beyond to seize the opportunities that lie there instead.

Now 25 years old, having completed my time at university in Glasgow whilst working various low-paid jobs in the city, I find myself reflecting on the financial hardships I faced on a daily and weekly basis. I am so aware of the prospects for academic and career advancement that may have been within my reach if it weren’t for the ever-increasing cost of travel.

All too often, I remember calling in “sick” to work, or excusing myself from lectures feigning headaches because paying my bills, keeping myself fed and buying my bus or train ticket from Greenock to Glasgow was impossible on my income. And I know I am not alone.

As someone who’s relied on Universal Credit while I looked for work after university, I can also see the benefits that free travel for those on UC would have in terms of opening doors to employment opportunities.

Earlier this year, the Scottish Government announced that it would offer free bus travel to those ages under 19 in a bid to tackle the climate emergency, encourage the use of public transport and save young people thousands of pounds a year. Whilst such plans are certainly transformational, if this scheme were to be extended to those under 25 and those receiving Universal Credit, then not only could Scotland significantly lower its impact on the climate and encourage financial savings and use of public transport, but as a country, we could see our economy and our people prosper, flourish and thrive.

We have seen through the Covid-19 crisis that there is a strong desire to look after each other. At the beginning of lockdown, people all over the country rushed to help their neighbours and friends. But the values of compassion and justice that are alive in our communities aren’t always reflected in the decisions we’ve made as a society.

Unless we use the economic recovery as an opportunity to redesign our economy, there is a huge risk that we will see a deeper entrenchment of poverty and inequality in Scotland. Increasing the payments people receive from the social security system and investing in jobs that pay at least the real Living Wage and provide secure hours and contracts will be essential to this. But so too will be providing affordable and accessible public services that are the fabric of any decent society. Expanding free travel to under 25s and people receiving Universal Credit must be part of this.