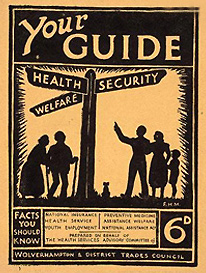 An anti-poverty charity says the Queen’s Jubilee is an opportunity to safeguard the future of the UK’s flagship social security system by establishing a new Royal Commission into the Future of Social Security.

When Queen Elizabeth took the throne in 1952, the UK had just started creating a modern welfare state, with the National Insurance Act in 1946 and the National Assistance Act of 1948.

The Poverty Alliance says that, 70 years on, the time is right for a national conversation about how social security should work in the years to come.

“In 1952, around 28 children out of every 1,000 who were born alive didn’t survive beyond their first year. Every child death is a heart-breaking tragedy, so we should be thankful that the figure is now around 3.6 per 1,000.

“Those improvements came about because of one of the greatest achievements built during the last 70 years – the welfare state, and the social security safety net that is there for all of us.

“But in recent years, we have been putting that progress at risk. Mortality rates are rising, and as recent research from the Glasgow Centre for Population Health has shown, that can be linked to the policies of austerity and cuts to the cash value of social security entitlements in the UK.

“Poverty is an injustice that has no place in our society. It restricts people’s life chances, and their ability to live with dignity. Government has a moral obligation to continue the fight against poverty and safeguard the legacy of the past decades. That’s why we are calling for the UK Government to establish a Royal Commission, to look at how we can renew and rebuild our social security system for the next 70 years.”

A Royal Commission is one the highest-level forms of inquiry that can be set up in the United Kingdom. The Queen appoints its members on advice from UK Government ministers, issuing the commissioners with a Royal Warrant.

They are usually formed to look at important matters that affect the country as a whole. Greater formality is expected than other forms of inquiry, and there is less pressure of time.

Royal Commissions typically work by gathering evidence and then producing a report. In the past, the work of Royal Commissions has led to the creation of the Criminal Cases Review Commission in England and Wales, to the reorganisation of Scottish local government into regions and districts in 1974, and to the referendum for a Scottish Assembly in 1979. The last Royal Commission was set up in 1999, to look at reforming the House of Lords.

Peter Kelly added “The covid pandemic and the current cost of living crisis has reminded us how vital our social safety net is, and how important it is that it’s there when we need it. But for too many people that safety net does not provide the protection we need. Establishing a Royal Commission on the Future of Social Security would provide us with the basis for renewing the basis on which that protection is provided. We are sure this is an idea the UK Government can get behind.”