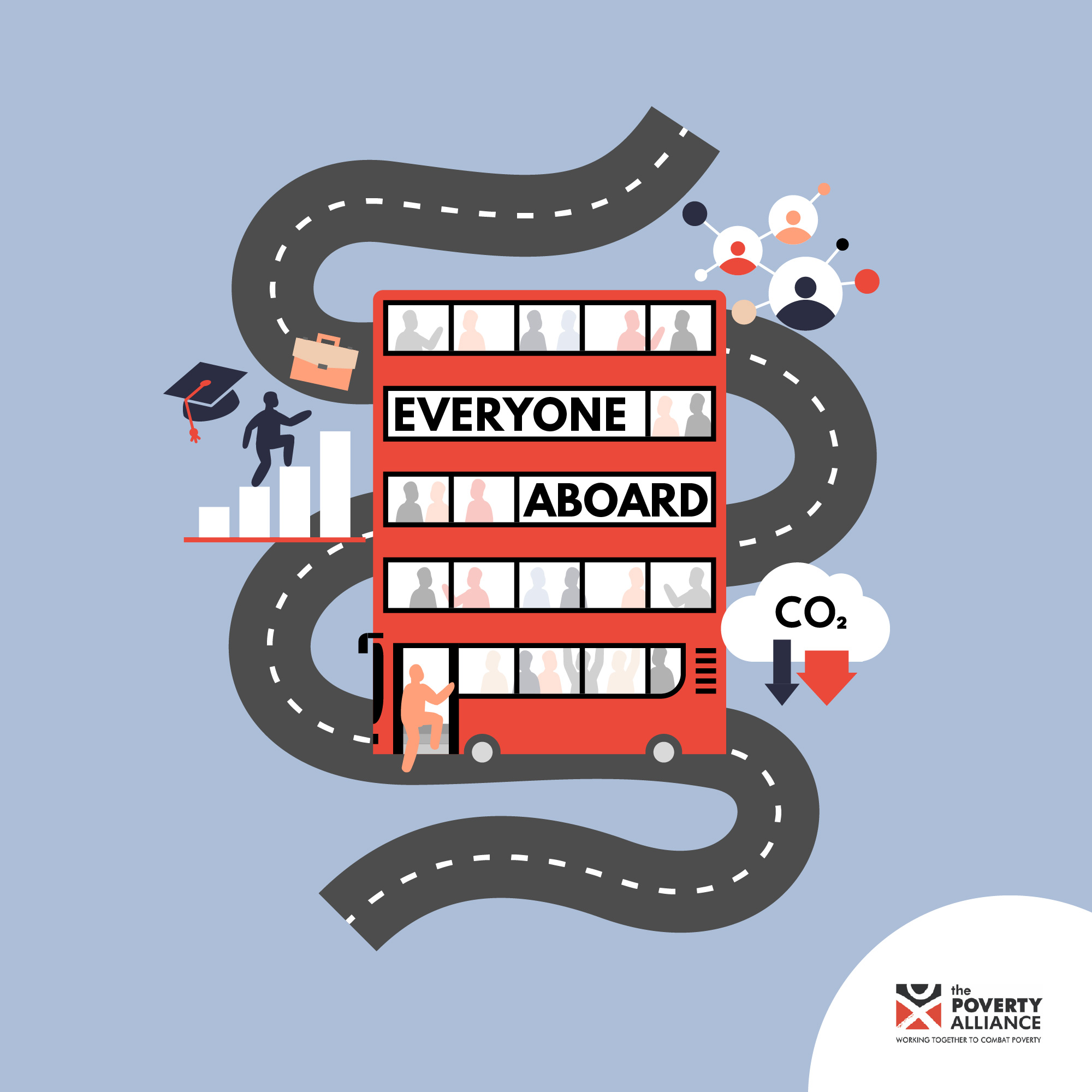 Over 100 organisations from across Scotland have today written to the leaders of Scotland’s political parties, urging them to commit to a radical extension of free bus travel, in a move that they say would have a transformative impact on the lives of people across Scotland’s communities. The call has been made as part of the Poverty Alliance’s Everyone Aboard campaign, which asks for their support in extending fre bus travel to under 25s and people on Universal Credit and other low-income benefits.

The coalition of organisations – coordinated by the Poverty Alliance and including Friends of the Earth Scotland, the Scottish Youth Parliament and Barnardo’s Scotland – are making the call at a time of growing poverty in Scotland, with recent Scottish Government statistics showing over 1 million people in Scotland are now living in the grip of poverty.

Bus travel will, the letter states, be critical in stemming the rising tide of pandemic-related youth unemployment, with bus travel particularly important for young people and people on low incomes to help them access the labour market. Without this action, the organisations have warned, they “risk being left behind in our economic and social recovery.”

“We are calling on the leaders of Scotland’s political parties to take the bold, far-reaching action to help loosen the grip of poverty on people’s lives. Removing the barrier to transport would be a significant step towards building a Scotland where everyone is included, no matter their income.

This move would also help advance gender equality, as women disproportionately rely on public transport to access jobs, healthcare and activities to boost their wellbeing. Lone parents, who are predominantly women, would particularly benefit. Expanding the use of public transport will play an important role in reducing Scotland’s emissions and responding to the climate emergency. Extending free bus travel is a key way the next Scottish Government can help make Scotland a greener and more just place for us all to live.”

“We believe that Transport Scotland and the Scottish Government should provide funding to support initiatives which make it easier, cheaper, and safer for young people to use active and sustainable travel options. Our 2018 national campaign All Aboard found young people feel bus fares are too high. The cost of public transport creates barriers to participation which are denying young people and those on low incomes access to opportunities, and this proposal would be a great step in the right direction.”

“Transport is the biggest emitting sector in Scotland. To meet our climate change targets, bold action must be taken to promote cleaner forms of travel, like public transport, and lead a just transition away from fossil fuel private car use.

Extending free bus travel to all young people under 25 and those on Universal Credit will form an important part of the solution and help ensure no one is left behind as we transform our transport system. The upcoming Scottish Parliament election provides political parties an opportunity to demonstrate their commitment to tackling climate change. We must seize it.”

The full letter can be read here: Everyone Aboard letter