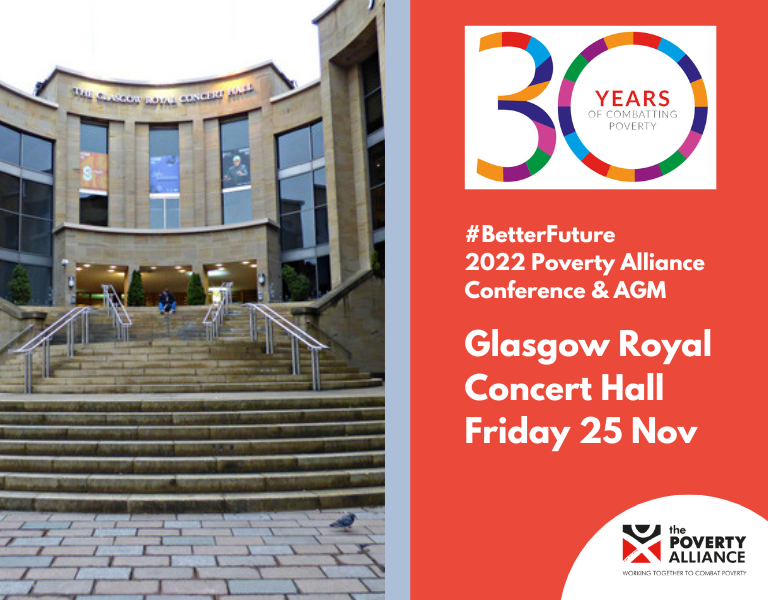 Activists from across the country are meeting in Glasgow today at the Poverty Alliance annual conference to discuss how best to help people through the current costs crisis, and build a better Scotland free from poverty.

First Minister Nicola Sturgeon MSP will give the opening address, outlining her vision for how the Scottish Government will tackle the poverty challenge in the future.

The conference comes as the Poverty Alliance marks its 30th anniversary. Throughout the day campaigners will discuss how Scotland can learn from past work on combatting poverty to create a better future for everyone.

First Minister Nicola Sturgeon said: “The Poverty Alliance and the members it represents have worked tirelessly over the last 30 years supporting people experiencing poverty, feeding into policy development and campaigning for many vital changes to help create a Scotland where no one is left behind.

“Poverty is an injustice and building a fairer, more equal Scotland is a priority for not only me, but the Scottish Government as a whole.

“We are in the midst of a cost of living crisis.  That is why, with the limited powers we have, we’ve been prioritising help for those households who need it most, so they have a little more cash in their pockets as well as supporting a range of universal services which are not available elsewhere in the UK and which reduce household costs such as free bus travel for younger and older people, free prescriptions, NHS funded eye tests and dental check-ups as well as access to free period products.

“I value the positive relationship the Scottish Government has with the Poverty Alliance, particularly when they challenge us. As we tackle the current crisis working together is the best way to amplify our asks of the UK Government.”

Poverty Alliance director Peter Kelly said: “As an organisation and as a movement, we have achieved a lot in the last 30 years to combat the injustice of poverty.

“In partnership with the Living Wage Foundation, our Living Wage Scotland team has been working hard since 2001, accrediting 2,900 employers who have delivered over £370m in extra wages to people in Scotland so far.

“And as part of the End Child Poverty Coalition, we pushed for the creation and expansion of the Scottish Child Payment, and to make sure that Scotland’s ambitious targets on child poverty are set down in law.

“These achievements show that ending poverty is  a realistic and achievable goal. We can redesign our economy so that every worker gets at least the real Living Wage, and we can renew and rebuild our social security system, so that every one of us has an income that’s enough to meet our needs.

“Now – during this time of crisis – is the moment for us to turn our shared values of compassion and justice into action and build a better future free from poverty.”