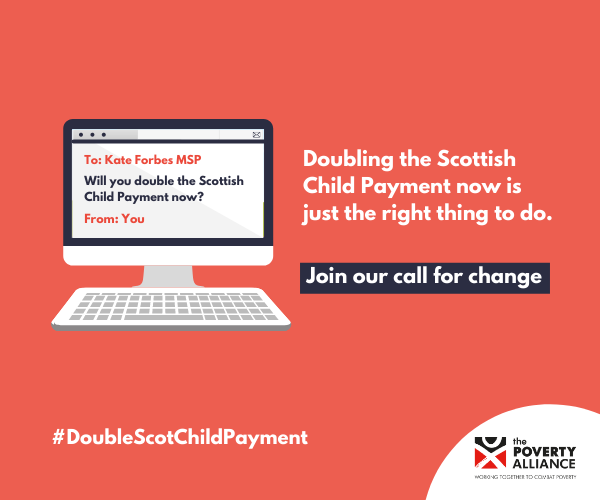 The Poverty Alliance have today launched a fresh appeal to Kate Forbes MSP, Cabinet Secretary for Finance and the Economy, to commit to immediately doubling the Scottish Child Payment and are calling on members of the public to back their plea.

We are making the call one month ahead of the publication of the Scottish Government budget, with a warning that if the action is not taken at the budget then families risk being overwhelmed by a rising tide of poverty. By doubling the payment – a £10 per week per child benefit for low-income families – now, Scotland can edge closer to meeting the national child poverty targets.

At May’s Holyrood elections, all five of Scotland’s main political parties committed to doubling the Scottish Child Payment. After initially committing only to fulfil the pledge by 2025, the Scottish Government said in September that they would do so ‘as soon as possible.’ But they have so far resisted calls to double the payment immediately, despite rising levels of hardship across the country.

Now, we are calling on members of the public to write to Kate Forbes to make clear to her the need to take this action now. To help, we have created an online platform allowing individuals to easily write directly to the Cabinet Secretary in charge of the Scottish Government’s spending, which can be accessed here.

“It is unacceptable that one in four children in Scotland are growing up in the grip of poverty. But Kate Forbes has a chance to loosen that grip at next month’s budget by immediately doubling the Scottish Child Payment.

In Scotland we believe in doing the right thing and refuse to stand by in the face of injustice. So we know that people across the country will get behind our call to tackle the unjust levels of poverty in our communities, by telling Kate Forbes loudly and clearly that this is the action we need now.

If the Scottish Government listen, we can get our national mission to end child poverty back on track. If they don’t, families across the country risk being overwhelmed by a rising tide of poverty. We simply cannot allow that to happen.”