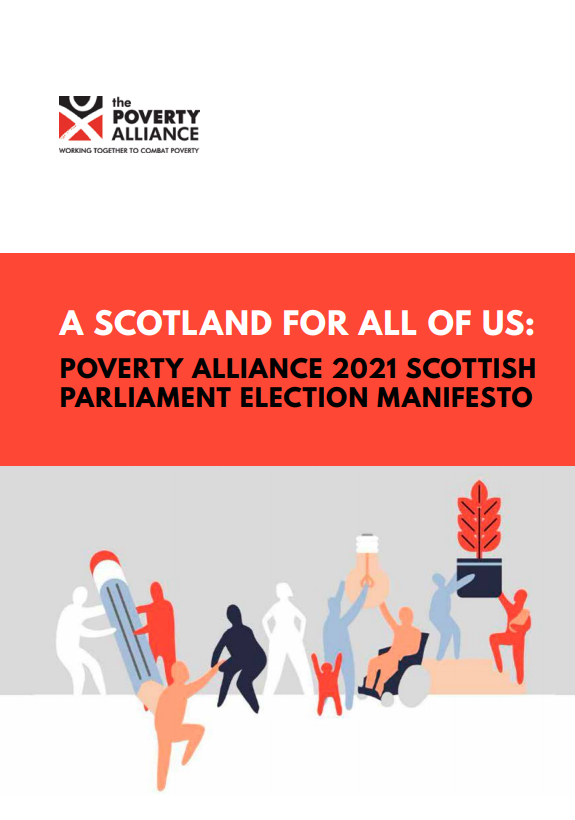 Stemming the rising tide of poverty across Scotland must be the defining issue of the Holyrood election, the Poverty Alliance have said today, with calls for all political parties to commit to a range of ambitious and bold action to boost incomes and reduce costs.

The calls were made as the Poverty Alliance launched A Scotland for All of Us, a package of measures that all of Scotland’s political parties are being urged to back in order to loosen the grip of poverty on the lives of people across Scotland. The measures include:

The manifesto is launched at a time of growing hardship across Scotland. Even before the pandemic, over one million people – including almost one in four children – were living in poverty in Scotland. Now with many more people being swept into poverty, Scotland’s child poverty reduction targets remain unlikely to be met without more urgent action in the coming years.

“In Scotland we believe in protecting one another from harm, and in the principle that every child should have every chance. Yet Scotland is also a country with unacceptably high levels of poverty and inequality.

Addressing the rising tide of poverty that is affecting so many communities should be at the heart of every party manifesto, and with the pandemic still having an impact this is not a time for timidity. All parties must pledge to take the bold and ambitious action to boost incomes and reduce costs that we have set out, including committing to a Minimum Income Guarantee and to taking action to create a more just economy and labour market.

The next Scottish Parliament must be remembered as one that reshaped Scotland for the better, that prioritised the needs of those facing poverty and inequality, and that built a Scotland not just for some of us, but for all of us.”