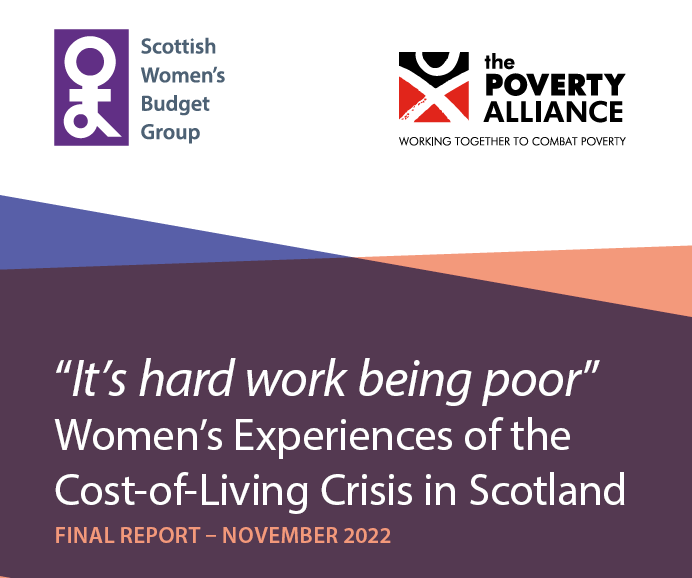 A new report has found shocking evidence that women in Scotland are suffering increasing hardship, destitution, and food insecurity due to lack of support during the cost-of-living crisis.

In research conducted in partnership, the Poverty Alliance and the Scottish Women’s Budget Group (SWBG) found that women are experiencing increasing financial hardship and are at risk of falling into further debt as a consequence of the cost-of-living crisis. Women in low-paid work reported often missing out on social security support or cost-of-living payments, or free school meals, because they earn just above income thresholds.

The research was funded by abrdn Financial Fairness Trust and Esmée Fairbairn Foundation and included women from diverse backgrounds across Scotland. Women told researchers they are worried whether they will be able to afford their energy bills in winter and parents and carers are struggling to afford food and essential items like baby wipes, incontinence pads, and toilet roll.

The report contains 15 recommendations on how to better support women through this crisis and beyond. Key priorities include:

SWBG co-ordinator Sara Cowan said: “The costs crisis is affecting the vast majority of us, but this powerful research highlights again the unjust way that poverty especially affects women in our society.

“Women are more likely to be poor, have lower levels of savings and wealth, and are less able to find suitable work or increase their hours if they’re in work often due to caring responsibilities that fall disproportionately on women.

“The women in this research talked about the impossible decisions they had to make to prioritise feeding their children, and whether or not to turn the heating on. Or not being able to buy things like baby wipes, incontinence pads, or toilet roll.

“The Scottish and UK Governments can help by increasing and extending the emergency support available to people, and working to put justice and compassion at the heart of social security and our public services.”

“This important research shines a light on the real experiences of women in Scotland. It’s not right that people are struggling to afford to feed their families, or having to live in freezing cold houses because they can’t afford to put their heating on.

“We hope this research will add to the growing body of evidence that households need much more help from government during this crisis, and that we need to make financial fairness an urgent government priority.”

“This research shows that women are at risk of being pushed into destitution. The financial support that has been made available so far by both UK and Scottish Governments to help with the cost-of-living crisis is clearly not sufficient for many of the women in our study.

“It is vital that the UK Government increases the value of social security benefits in line with inflation. Any cut to UK benefits will led to unacceptable hardship for more women.

“In Scotland, we must find ways to expand eligibility for people who are in employment, are in need, but miss out on support. Too many women in Scotland are in urgent need of support – Scottish Ministers must leave no stone unturned in finding resources to support them during this crisis.”

The diary entries and interviews document women’s increasing desperation and despair as costs kept rising and incomes stayed where they are.

Stella, a Black lone-parent mother living with her children. Due to illness and subsequently losing employment, she had to apply for Universal Credit two years ago.

Even before the cost-of-living crisis, she noted how Universal Credit was an ‘insufficient means of livelihood even under normal circumstances as a single parent’. Now, due to increased utility bills, Stella supplements income with credit cards, which are accruing debt, and asking to ‘borrow money from family and…friends for financial help’. Stella was concerned about her energy bills, so now she only uses the washing machine once a week for her family.

Stella’s children were conscious of rising costs: ‘even as a child [her son] realises how much food bills have increased, and it impacts him greatly’. On top of the impact this is having for her child, she shared that she is having to consider ‘significant changes in [their household’s] diet’.

Stella was becoming increasingly socially isolated because of the high cost and unreliability of public transport. Consequently, she is unable to ‘attend church every Sunday. This impacts me spiritually and deprives me of much needed interaction and social isolation’.

Her September entries were mainly focused on how price rises were impacting every aspect of her family’s life. Food was costing over £20 more each shop, and when thinking about the future, she noted: ‘it will be too much and [she] will not be able to afford it’.

Stella wrote: “This cost-of-living crisis have brought untold pain and suffering on women especially single parents and children because of the way it impacts our lives on a daily basis. Not being able to afford the essentials of life can be very stressful and robs women of their dignity and self-worth.”

Sue is a white lone parent mother who has long-term health issues. She works part-time and recently stopped accessing Employment and Support Allowance by taking on a second low-income job.

To manage increased costs of living on her low income, Sue made a list of ideas including getting another part-time job, asking for more hours in her current employment, asking for a mortgage holiday, skipping meals and selling jewellery and things in the house. She wrote: “Sad one this for me, sold jewellery, mine and my gran’s wedding rings…but it is to help in a crisis that our household is facing and needs action fast so it had to be done”.

Idia, a lone mother, reflected on the challenges of being able to afford food and going hungry in almost all her diary entries. On the small amount she receives as an asylum seeker for her family, she wondered how she is expected to be able to buy food with costs rising week by week. She shared the damaging impacts on her mental health. She also shared: “the most frustrating part of the week for me was not being able to afford to get my kids snacks”.

“I spoke to my friend who told me she has been starving and only eats at night,” Idia said. “I have started doing that though it didn’t go well with me the first day, but I will get used to it.”

Sarah is a parent and works full-time in a role providing advice and support to people in the community. In October, she was concerned about managing her existing debts and rising energy costs, particularly as she lives in an old house with poor insulation. She is no longer able to afford to go out places and see family or friends. Her interview highlighted the challenges for people in low-paid work during the crisis. She is not entitled to benefits or support with the cost of living.

Sarah said: “And I was thinking, ‘How can I… how can I keep my daughter, how can I keep warm? What if I have to go to work and then come home and freeze my ass off every night. And I was, I honestly got to the point where I was thinking, ‘What’s the point of living?’ You were going into shops, the prices were going up so much, and it was like, ‘Well I work so God damn hard, I get no help. I’m helping people get help, do you know what I mean? But yet I can’t access any help myself?’.”