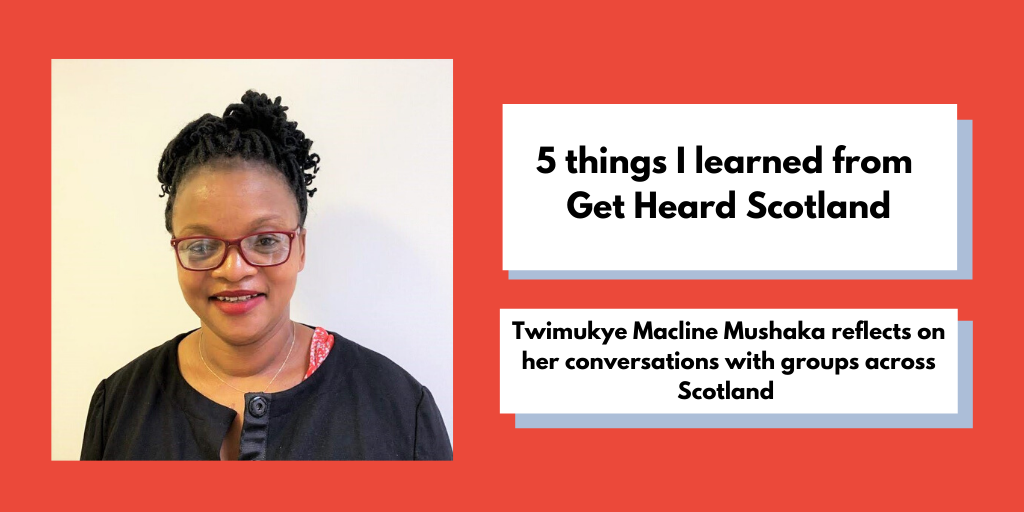 Twimukye Macline Mushaka, Senior Fieldwork Officer at Poverty Alliance, reflects on the things she learned from talking to different people across Scotland as part of the Get Heard Scotland project. Her blog comes ahead of  the publication of the full Get Heard Scotland report later this month. While all of these sessions were undertaken before the current crisis hit, we anticipate many of the issues discussed will become even greater challenges in the coming months.

The essence of Poverty Alliance’s grassroots engagement work is about giving people with experience of poverty the opportunity to get their voices heard in order to inform national and local policies to tackle poverty.

Get Heard Scotland is a three-year community engagement programme that seeks to ensure that the voices of people experiencing poverty across Scotland are heard by policy-makers. This work is intended to support the delivery of the Scottish Government’s 2018 Tackling Child Poverty Delivery Plan, which amongst other things, tasks local authorities and health boards with developing joint action reports outlining what they have done and what they plan to do in response to child poverty.

In 2019, we delivered 37 local discussions, primarily focussed in three local authority areas: Highland, Midlothian and North Ayrshire. The sessions were hosted by local third sector organisations and in some cases in partnership with local authority officials. Discussions were also held in Glasgow, Edinburgh and North Lanarkshire in partnership with Broomhouse Community Development Trust, Action Group, Glasgow Association for Mental Health (GAMH) and One Parent Families Scotland.

The reflections below are based on my own insights in the sessions that I led. Later this month, we will publish a report summarising the common patterns that emerged across all the sessions. These were carried out before Covid-19 struck. It is likely that without increased interventions from our governments, many of the issues raised here will become more challenging in the coming months.

5 lessons from Get Heard Scotland;

Later this month, Poverty Alliance will publish the full report of all the Get Heard Scotland sessions held across Scotland in the last year.