Community Activist Kerrie Friel discusses the need to fast track the Scottish Government’s new income supplement for families on low incomes. I believe that the people of Scotland are proud that we live in a society founded upon compassion and justice, yet without urgent action, one in three of our children will be swept into … Read more

More than 70 leaders and organisations from across Scottish society have joined together to call on the First Minister to speed up the introduction of a new income supplement to tackle child poverty.[1] Poverty campaigners, faith leaders, academics, children’s charities, trade unions, women’s groups and industry bodies have today written a joint letter to the … Read more 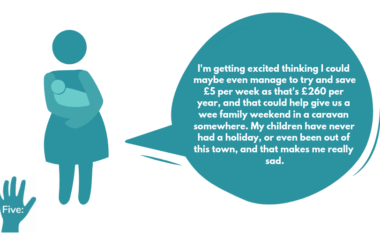 In a just and compassionate society like Scotland, every child should be given the opportunity to participate fully in society. Currently, however, 240,000 Scottish children are trapped in poverty. As a society we have a moral duty to change this. In Scotland we have the power to lift tens of thousands of children out of … Read more

The right to work, the right to health, the right to education, the right to cultural life, and the right to an adequate standard of living; these are the inalienable rights we all share. Yet too often, the rights of people on low incomes are not fully realised because of unaffordable, unavailable and inaccessible transport … Read more

Responding to the report, Anela Anwar, Convenor of the Poverty Alliance, said: “This report lays bare the scandalous reality of poverty in the UK. Our social security system should be an anchor that helps us stay afloat during difficult times. But as the report makes clear, the introduction of Universal Credit, the benefits freeze and … Read more

Official statistics released today show poverty is continuing to rise in Scotland, with 24% of children (240,000) now living in poverty. In response, the Give Me Five campaign, supported by senior academics, children’s charities, anti-poverty groups and leaders of Scotland’s Churches have renewed their call for the Scottish Government to deliver an immediate cash boost … Read more

The Poverty Alliance have responded to today’s Spring Statement from the Chancellor, describing the failure to end the benefits freeze as a missed opportunity to unlock hundreds of thousands of people across the UK from poverty. Despite continued calls from anti-poverty organisations – as well as the Work and Pensions Committee – to end the … Read more

The Scottish Government published its draft budget today, setting out the spending aims and commitments for 2019/20. Commenting on the budget, the Poverty Alliance have described a missed opportunity to boost the incomes of families across Scotland who are struggling to get by. Neil Cowan, Poverty Alliance said: “1 million people in Scotland – including … Read more

The Poverty Alliance has responded today to the initial findings of the UN Special Rapporteur’s inquiry into poverty in the UK, with a call for renewed action to address rising poverty rates. The findings lay bare the impact of the decision to implement austerity policies – and particularly the impact of cuts to social security … Read more