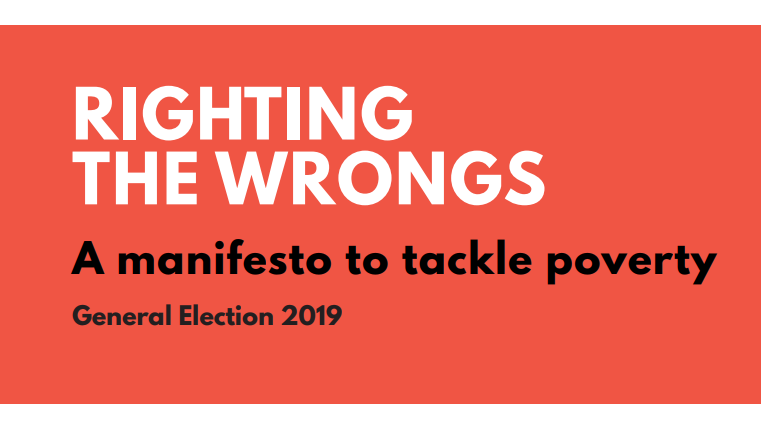 Poverty campaigners have today published their demands for the next UK Government, with calls for a range of policy commitments to help stem the rising tide of poverty.

In Righting the wrongs: A manifesto to tackle poverty, the Poverty Alliance urge the next UK Government to put solving poverty at the heart of all that it does, including by creating a more compassionate social security system, building a labour market that works for everyone, and protecting people on low incomes from the effects of Brexit.

With over one million people – including almost one in four children – living in the grip of poverty in Scotland, the manifesto seeks to not only influence the actions of the next UK Government but also ensure that poverty is one of the key election issues in the lead-up to the 12th December poll.

“It is outrageous that so many people have been swept into poverty in recent years, and figures released last week show that record numbers of people are now using foodbanks. This simply cannot go on.

The election gives us the opportunity to look at what we can do to address this national scandal, and to place solving poverty firmly at the heart of the next government’s agenda. Communities across Scotland need our political parties to listen to our calls, and to commit themselves to loosening the grip of poverty on people’s lives.”

Jamie Clark, a community activist from Glasgow, knows all too well the struggle of raising a family on a low income:

“Living in poverty is like being stuck in the middle of a spider’s web with no escape route. You can climb further up the web to try and get out but something keeps dragging you back. Low pay, insecure work, zero hours contracts and a punitive social security system make it very difficult to escape. That’s the trap of poverty. Political parties need to wake up to this and take the action we need.”

Righting the wrongs: A manifesto to tackle poverty can be read here.